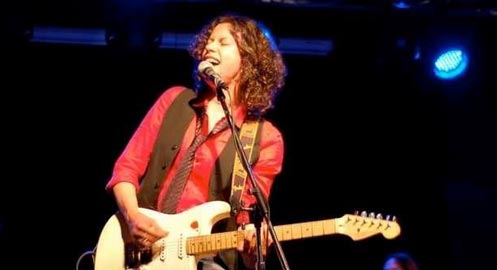 WHO SHE IS: I first met the longtime Hoboken-based guitarist, singer and songwriter when she was part of the power trio Gut Bank, back in the mid-eighties. They played a heavy blues that was way harder than the indie-rock of the usual Maxwell’s band; they were grunge before it was a term, Riot Grrrls pre-Revolution. I caught up with Kuhl again in the ‘90s, when she was still laying down luscious leads for the band Sexpod. Karyn’s a rock’n’roll survivor, never stopping making badass mood music, and is now the leader of the Karyn Kuhl Band. Check out “Floating World,” from her EP The Beautiful Glow: mesmerizing, hypnotic, beautiful.

WHY SHE INSPIRES ME: Kuhl never let mainstream indifference slow her down or silence her. She still gigs regularly around the Tri-State area, still makes records, still looks about the same as when I first met her almost 30 years ago. Kuhl reminds me that perseverance is its own form of success, and that music transcends earthly details like gender and trend. She’s an example of how you have to make art because you believe in it, and then it will never leave you. One thing about surviving: Old parts of your life come back to you – the future shows your past. That’s why almost three decades, after I first I interviewed her for a Providence weekly, Kuhl is playing a song with the Stay-at-Homes as part of the All Hail the Queens of Noise Runaways tribute I’ve co-organized, with Tammy Faye Starlite, in New York City.

Welcome to that time of year  when you need to find a gift for the seemingly impossible: an affordable,...