An entrepreneurial artist and burnt-out mommy trying to keep her businesses going — that was me in a nutshell.

My daughter was just three months old when I hired a part-time nanny and decided to return to work in my studio. If I ran to work, didn’t bathe, talk to anyone, exercise or eat, I could get in four solid hours of work a day. After dedicating myself to this schedule for six months, I saw little progress. I ended up throwing my back out and was confined to a chair for two work days. Not to mention that I was now running late on projects for the first time ever and my commission list was on hold.

I knew I needed help and something had to change.

Four different people suggested getting an intern. I didn’t listen at first; I’d had interns before with mixed results — they can be more of a cost than a cure. Example: I once had an intern make $300 worth of color copies from a black and white document. Yeah. 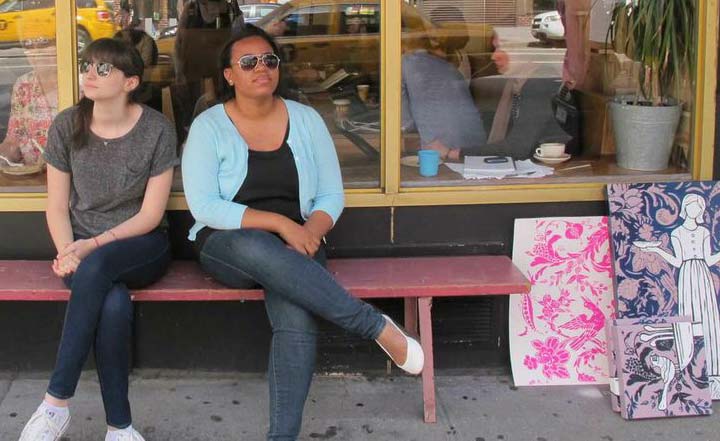 However, this was an emergency. I was at DEFCON 3. So I posted an ad for an intern on Facebook. Within two hours, and after a cursory resume review, I had two bona fide volunteers. The first was Lizzy, the daughter of a friend, looking for an internship to fulfill her high school graduation requirement. Intern number two, Alison, was another referral — the cousin of someone who worked for me many moons ago. She was taking a year off from college to decide if she wanted to pursue an art degree.

As it turns out, getting help from interns for my business paid off big time.

Here are seven big returns I experienced after my first few months:

1. Motivation. Bringing two helpers on the scene was like a swift kick to the head; it changed my outlook and got me moving again.

2. Inspiration. Having someone observing me on a daily basis made me really think about my art and why I do it. When you’ve been doing the same job for 15 years, it’s good to take a breather, look around and reassess. I started two new painting series as a result, and got my business on track.

3. New music! I let the girls DJ on a daily basis and liked what I heard. Hey, people over 40, I don’t care how cool you think you are, you can learn about some fabulous music from 20-somethings. You may even like some of it.

4. Harry Connick Jr. is no longer considered hot. What? Lizzy and Alison just about barfed when I referred to the jazz musician-turned-American Idol host as hot. The good news is we were all on the same page regarding Ryan Gosling. He spans generations.

5. Criticism is a two-way street. As an artist, you constantly receiving criticism. I’ve learned to just consider the source, see if there is anything I can learn from it and move on. As a coping mechanism, I have a “compliments folder” where I keep the nice things people have said to me and I read through them when I’m feeling challenged with my work.

Criticism takes on another light when you have two young faces sitting right next to you, watching your every move. How can I help them prepare for what’s to come? They will face hard, harsh criticism in college and then much more when they enter the working world. We had many discussions on this fact of life that they will face no matter what they decide to do. I never thought of myself as having thick skin, but now I do. You can’t survive in this line of work without it.

6. Having real assistants is better than having imaginary ones. When I first launched my business 12 years ago, everyone had an assistant but me. However, since I was constantly getting calls and emails from someone else’s assistant, being the creative person that I am, I invented one for myself. And I gave her a ridiculous name: Candle. I returned emails to people using Candle’s signature, referred to her at meetings (my assistant Candle will get back to you on pricing) and even returned some calls as Candle. While Candle gave me endless hours of comedy and giggles, she never compared to the real thing. Having a real helper is way better than an imaginary one.

Artist Laura Loving is a successful entrepreneur and New Yorker of thirteen years. Born in Charlotte, North Carolina, Laura received a BFA degree from the University of Georgia. She currently lives in Greenwich Village with her husband, Peter, and daughter, Stella.