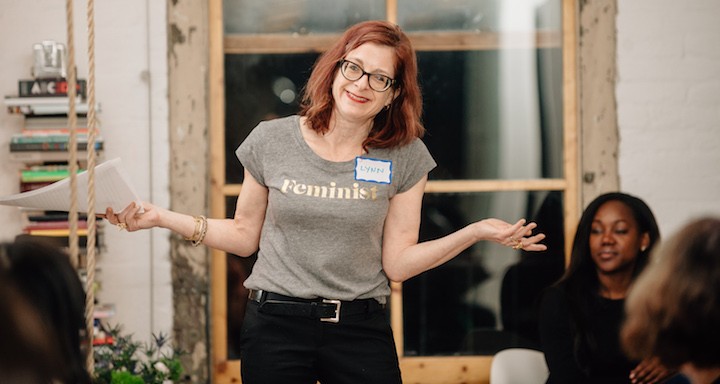 This edition of TueNight Live was a disaster! A flop! A miserable wreck!

We jest — it was just our stories about tragic jobs, bad (and smelly) dates and persistent pain that made our evening one big FAIL.

For this edition, we huddled into the gorgeous Friends Work Here co-working space in Brooklyn, gabbed and drank with our readers and writers, and enjoyed a riveting, emotional, hilarious evening of snafus and storytelling. Here are a few snaps:

The theme of the evening, projected on the wall.

Getting ready to tell tales.

Lynn Harris kicked us off with her tale of Breakup Girl — losing a job, a boyfriend and a dog in the same week.

Stephanie McRae described her bomb of a marriage and how she can’t seem to lose her in-laws.

Judy McGuire read The Story of the Guy Who Crapped In My Bed — the terrible tale of the “fecal leaker.” We’re still laughing.

Actor Ashlie Atkinson told a harrowing story about her hometown…

…with the audience hanging on her words.

…leading to her remarkable ascent onto the hit TV show 24 (which we watched!)

TueNight social media editor Karen Gerwin led the audience in an open forum, sharing her own maternal fails (hint: she has a teenage daughter).

Finally, Stacy London’s powerful story of living with pain in the present moved us all.

After which, we all wanted to give her a hug.