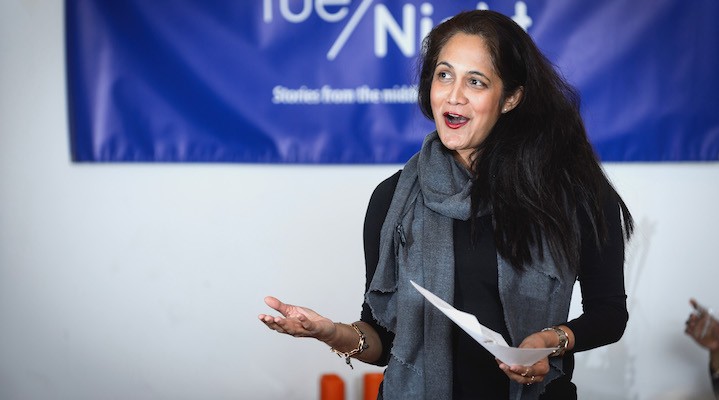 We came, we listened, we drank, we noshed and of course we swapped! Last Tuesday, we huddled at the lovely Collab fabrication, lab and innovation studio, in downtown Manhattan to hear a host of hilarious and moving TueNight tales about life swaps — from changing our age, to career pivots to spiritual transformations. And people brought personal items to swap. More on that below.

(All photos by Kacy Jahanbini unless otherwise noted.)

Margit introduced the night of readers, thanked the wonderful Adina Levin for hosting at her space, and gave props to Tattly for providing the evening’s body art.

Lynn Harris kicked off the evening with some feminist mojo, reading “Why I Changed My Son’s Last Name to My Own.”

Wendy Marston described, in bitchy detail, “The Magic of the Bitch and Swap.”

Wendy Sachs gave us her expertise on career swaps after a few of her own, which she charts in her new book Fearless and Free: How Smart Women Pivot and Relaunch their Careers. (Highly recommended!)

We always love to see a few regulars and meet a few newbies.

And celebrate friends meeting up again.

Dionne moved us all with her beautifully lyrical writing on her change of faith, “My Struggle With God Ended on a Plane.”

We were all in stitches.

After a break for drinks and snacks,

…our own Stormy called us back from our chatty groups as only she can. It’s the hardest part of the evening.

There were several stories of good swaps that night. Robin Bobbé talked about the pair of trousers she brought from a photo shoot with Annie Golden of Orange is the New Black and Hair fame.

TueNighter Adrianna introduced our next readers.

Sarayu Srinivasan described the drastic (and painful) difference between being a glamorous venture capitalist in India and a broke start-up founder in the U.S.

And professional storyteller Robin Gelfenbein rounded out the night with her laugh-out-loud recounting of trying to swap out one very lame shrink. “I Tried to Break Up with My Therapist. It Didn’t Go Well.”

Here were some of our items for swapping. Who will take the Leif Garrett 45? (Sarayu ended up with it!)

Stormy swapped for some much needed sneaks.

From Karen, Margit and Adrianna and the rest of the TueNight crew, thank you for coming.

Sign up for tickets to our next event, GLOW.