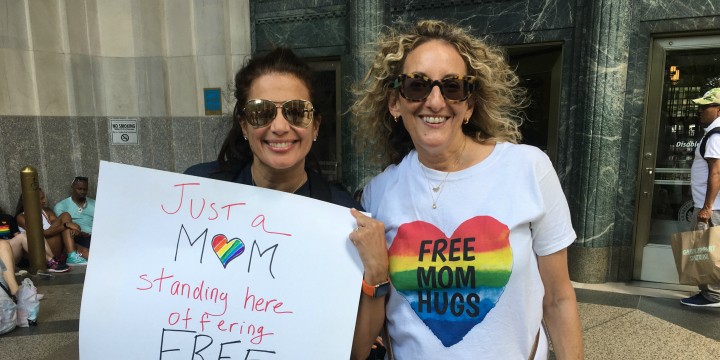 Nancy (at right), with her Feed Our Democracy Partner Isabel Kallman, giving out free hugs at the NYC Pride parade

Quick bio: Nancy is one of the co-founders of Feed Our Democracy, a grassroots organization dedicated to encouraging activism and raising hell. She is the co-founder of KidzVuz Media, and the vice chair of the board of Transport Theatre Group, an off-Broadway theatre company.

Beyond the Bio: “The hardest part about being over 50 is the invisibility, but it’s also the most freeing.

It’s only when the general public started looking at me less that I was able to see myself more clearly.”

1. On the nightstand: The Porpoise, by Mark Haddon (he also wrote The Curious Incident of the Dog in the Night Time), Do Not Say We Have Nothing, by Madeline Thien. And ,very uncharacteristically for me, since I almost exclusively read fiction, Sapiens, by Youval Noah Harrari. That last one is brilliant but slow going.

2. Can’t stop/won’t stop: Eating carbs. Life is not worth living without carbs. Seriously.

3. Jam of the minute: I’m a Broadway Geek. (I even have my own Drama Desk Award to prove it.) Classic Broadway tunes and Jazz Standards are the soundtrack of my life.

4. Thing I miss: That the bulk of my family time is now spent as a twosome, instead of a foursome (my twins are in college). I love being with my husband, but it’s weird that all four of us being together is now the exception and not the norm.

6. Current crush: Preet Bharara. One of his kids plays baseball on the same team as my cousin’s kid. I will stalk him.

8. Will wine about: Oregon Pinot Noirs. LOVE them.

9. Best thing that happened recently:  Feed Our Democracy’s National #DayofAction rolled out in seven cities on one day. Exhausting, exhilarating, and hopefully just the beginning. We have a lot of work to do between now and next November.

10. Looking forward to: Getting the Orange Menace out of the People’s House and into the Big House where he belongs. I look forward to never having to think about, hear about, or see his horrifying visage ever again.

Catherine is an entrepreneur, writer and recovering academic. She’s the CEO of the League of Badass Women, a private...

For those of us around in the mid-80s, we may have a fondness or nostalgia (or deep cringe) for...

Renee is a novelist, lawyer, and professor interested in Black women’s fiction, the intersections of law and literature. Her...

I Learned Everything I Know from Harriet the Spy

Brick houses, courtyard apartments with trees and dirt in the yards, alleys, little grocery stores and bickering neighbors: This...

Faith Adiele is a travel memoirist and essayist, teacher and host, storyteller and speaker who likes to say YES!...

There will be no children in my future. Ever. Yes, I am married. Yes, my husband knows that I...

Ayana is a writer and new mom who just moved back to her hometown, Philly. She's gearing up for...

The Real Cost of Caregiving

When I was recently in Pittsburgh, giving my sister a much-needed break from taking care of our mother, I...

Laurie White is a writer and editor with a long history on the internet (most recently at mom2.com) where...

Siblings at Odds: He’s an Evangelical Preacher, I’m an Atheist