When I started STFU Parents, a user-submission-based website highlighting “parental overshare,” I didn’t realize that I was signing up to look at so much shit. Literally.

At the time, my definition of “oversharing” did include mannerly updates about potty training, but never in my wildest nightmares did I think parents would post pictures of their children’s actual fecal matter — or long-winded descriptions of said fecal matter — on Facebook. Having been aware of the explosion of “mommy blogs” at the time, I figured if you wanted to post about your child’s diarrhea, you’d probably do so on a personal blog rather than blast a digital telegram to your friends, relatives, neighbors, former teachers, and bosses.

Boy, was I naive.

I quickly discovered that many parents are delighted by their kids’ poop and think that all of their friends actually care. I filed away hundreds of these submissions in a folder titled “Bathroom Behavior,” and over time I began noticing bizarre patterns. I created sub-folders for various topics pertaining to children’s poop, such as “painting with poop,” “eating poop,” and, naturally, “diaper blowouts.”

I continue to pray that the TSA and/or the good people at the Apple Genius Bar will never, ever have to glimpse the files on my computer. If they do, I’m fairly certain they’ll think I have the world’s most repulsive fetish, not to mention OCD due to my extensive filing system.

So, why do I maintain this website? It’s a fair question, and the reason is because of the emails I receive from readers saying that I’m providing a public service. Parents in particular send messages outlining how insane they think some of their parent-friends are. By highlighting this form of oversharing, I’m giving a voice to the majority of people who find this use of social media balls-to-the-wall crazy.

And while I can’t say I take pride in that fact, I have learned a few things along the way. Namely, what parents shouldn’t post about unless they want a healthy portion of their online friends to think they’re bowel-movement narcissists. So, in an effort to continue this public service, I’m sharing five of the most common examples of text-based poop updates that are stinking up social media.

1. Posts With Sensory Details
We’ve already established that fecal Facebook updates are unwanted in general, but it’s the details that take a status update from “meh” to “blech.” Parents should save the smells, textures and shapes for awkward dinner party conversation among close friends (who will promptly ask them to stop talking). 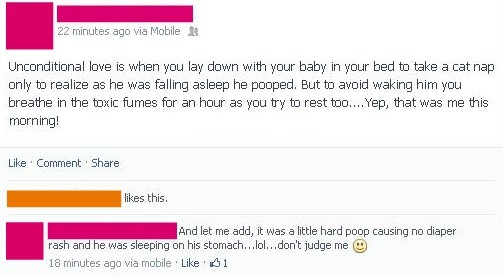 2. Story Hour-Style Updates
Parenting is, as they say, a “wild ride,” and all parents have a story (or 30) pertaining to poop. But we don’t need to hear them in status updates.

I don’t mean to be rude, but we get it — your kid is potty training and it’s the worst thing ever. Then, he or she is trained and it’s the best thing ever. It’s a big deal, a milestone for sure, but the constant updates aren’t necessary. Facebook is not a poop journal. 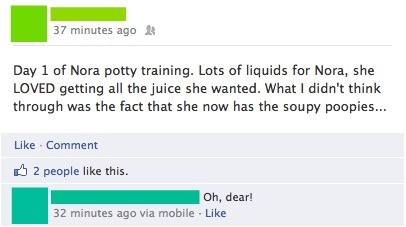 4. Constipation Updates
When babies get constipated, parents go on Poop Watch. And when Poop Watch plays out on Facebook, you can be sure to receive at least three updates: One for the initial announcement, one to let everyone know the baby still hasn’t pooped, and one inevitably saying that Poop Watch is over. It’s times like these that the “Hide” feature comes in handy, unless of course you’re a fellow poopy parent. 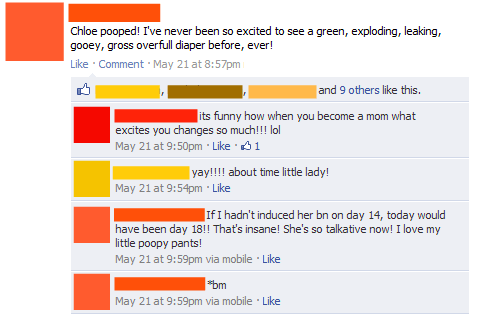 5. Bath Poop Updates
Much like oil and water, feces and water don’t mix. At least, they don’t on Facebook. If the word “floater” can be used to describe your status update, you may want to rethink your social media approach. 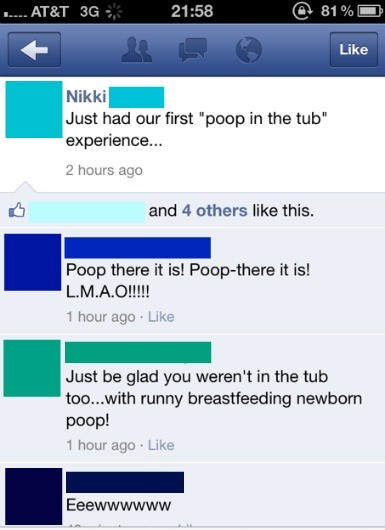 As the saying goes, everyone poops. Just because a child’s poop carries more weight, so to speak, than the average adult’s doesn’t mean it has a place on Facebook. If you’re a parent, do your friends a favor and keep the potty talk offline.

Blair Koenig is a Brooklyn-based writer and humorist who's seen far too many pictures of poop and placentas. She is the creator of the popular blog STFU, Parents and the author of STFU, Parents: The Jaw-Dropping, Self-Indulgent, and Occasionally Rage-Inducing World of Parent Overshare. You can follow her at facebook.com/STFUParents or on Twitter @STFUParents.