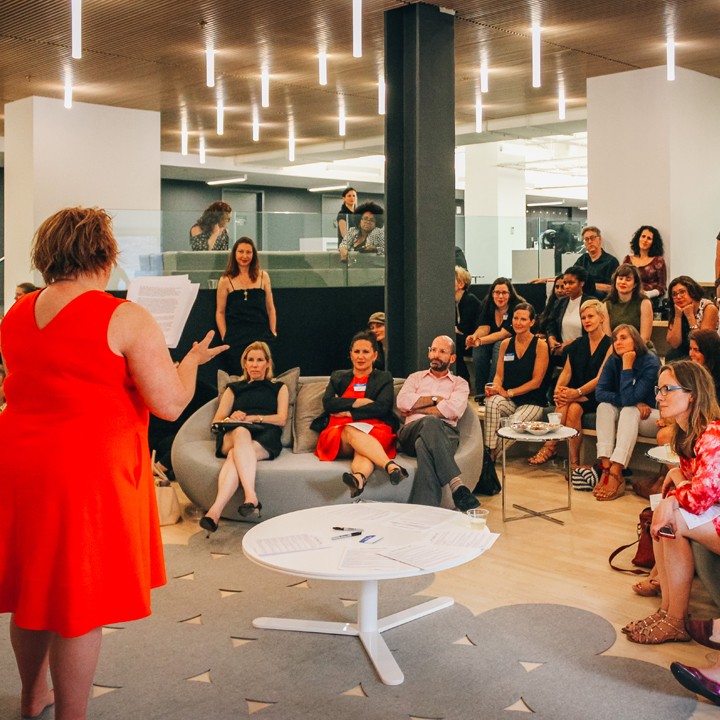 Sixty+ women joined us last Tuesday night as eight storytellers took us on a round-the-world tour: Singing through Buenos Aires, hitchhiking across Italy, under the Great Barrier reef, returning to Haiti and more.

For our fourth live storytelling evening, we partnered with Yahoo Travel who hosted us in their lovely Midtown offices. The event was also a benefit for the wonderful organization Girls Write Now. Here are some of the photos from a raucous, hilarious and moving evening of tales, courage and worldwide jaunts.

Margit had a chance to interview Yahoo Travel’s Paula Froelich, and the star of A Broad Abroad, who talked about how “travel is not a luxury anymore, it’s a mandate.”

We should all get our of our comfort zone, embrace more life leaps and travel.

She vouched wholeheartedly for traveling solo, which segued nicely into Courtney Colwell’s piece later that evening.

Courtney reads her piece Cyclone Approaching! Why I Chose to Dive Anyway.

“I did hitchhike in Isarel in the 1980s and tonight’s story brought back memories.” —@hollychronicles

Suzan Bond, who wrote this piece for us, said “I’ve never hitchhiked but I certainly won’t after @GlynnisMacN story.”

“He was my zipless fuck, and he didn’t need to be well read.”

“Gospel music is the universal expression for ‘I see you” — Penny Wrenn reads about traveling around the world with her gospel choir.

“Glad I was able to catch amazing writers at #TalkTueNight. Made me excited about my summer travel.” — @raquelita