Earlier this year, at the South by Southwest festival, I witnessed a friendly debate between two rock star science and tech leaders…  over high heels. “What shoes would Steve Jobs wear? … We need to give women permission not to give a shit,” said Lindsey Shepard, VP of Sales and Marketing for of GoldieBlox.

Mae Jemison, the first African American astronaut countered, “Hey I love my heels… Why do we put things in the context of men? When do we get to determine the standard of behavior?”

Okay, so the panel had nothing to so with shoes; it was about “Diversity in STEM” and 90% of the discussion focused on how to coax more women to become engineers or scientists. Still, this moment struck me. Even the most brilliant minds care about footwear — because it makes us feel and look good (yes, rare that the two align) as we code, as we give a talk, as we walk a mile. And at this point in our lives, we’ve had a handful of decades worth of footwear fun — and footwear hell — so it’s OUR decision to heel or not to heel.

Even if, as just reported today, the Cannes Film Festival allegedly banned women from wearing flats!?

According to Screendaily, “In a bad PR move for the push for gender equality, a handful of women in their 50s were turned away from the screening of Todd Haynes’ competition entry Carol [the film’s feminist appeal further ironising the shut-out] on Sunday night after being told the height of their smart footwear didn’t pass muster.”

You have to love that, not only were these sensible-shoe wearing women, but they were “in their 50s.”

This resulted in a flurry of beautiful photos on Twitter of elegant women wearing flats. My favorite: 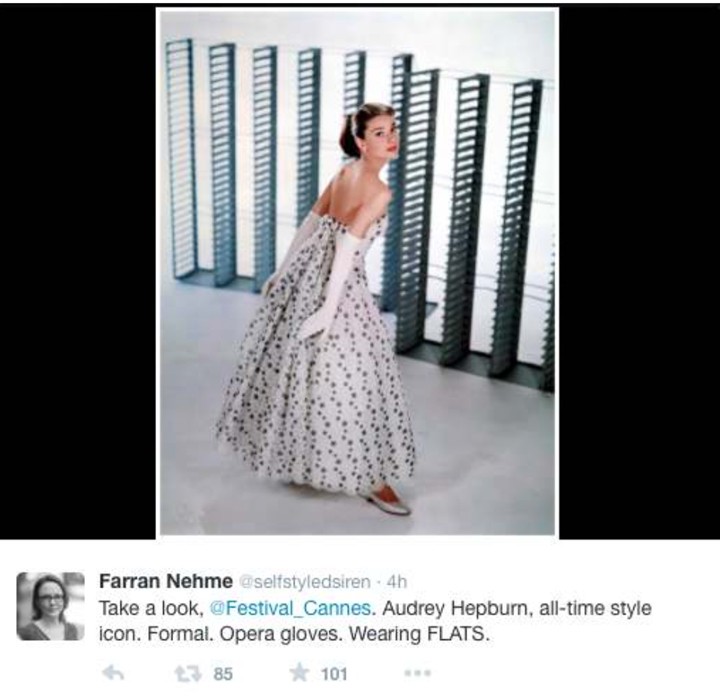 To all this I say, someone deserves a high heel in their Cannes.

Be kind to your sole,