Last Tuesday (of course) we noshed, drank and reveled to celebrate one year of TueNight. And without further ado, here are a few photos….

The event was held at the beautiful Park Avenue South WeWork in New York City, last Tuesday, October 7. Adrianna hand screen-printed some goodie bag totes for the occasion (sleeves rolled, that one.)

The founders of BinderCon — Leigh Stein (l) and Lux Alptraum. We learned Lux was a roller derby goddess; we think she’d like this story.

Erin Vilardi (center) from Run Vote Lead might just be asking a woman to run on the spot!

Tattly made us adorable temporary tattoos for the occasion that say “Tales to Tell” (cause we have ’em.)

Chantal Jean-Pierre ended the evening’s readings with Cherisse Gardner’s piece, The Day I Cut My Hair, I Lost More Than Locks. Nary a dry eye in the house.

Attendees, including writer Gretchen Rubin, Kate Lee of Medium, Amy Choi of the Mashup Americans and Stacy Morrison of BlogHer listen intently as we read some of our stories.

Nicole Golden, actor extraordinaire, read I Was a Heroin Ethnographer, by Judy McGuire. Here she is handing out some of our birthday cake.

Our sponsors, including Wine Sisterhood and Middle Sister Wine, Cabot Cheese, La NewYorkina, Hint Water and Aperol (see the glowing orange Aperol Spritz — was amazing) helped to make the evening a smash with everyone, including founding TueNighters Kat Borosky and Adrianna Dufay.

Julie Sygiel of DearKates.com (l) and Bea Arthur of PrettyPaddedRoom.com 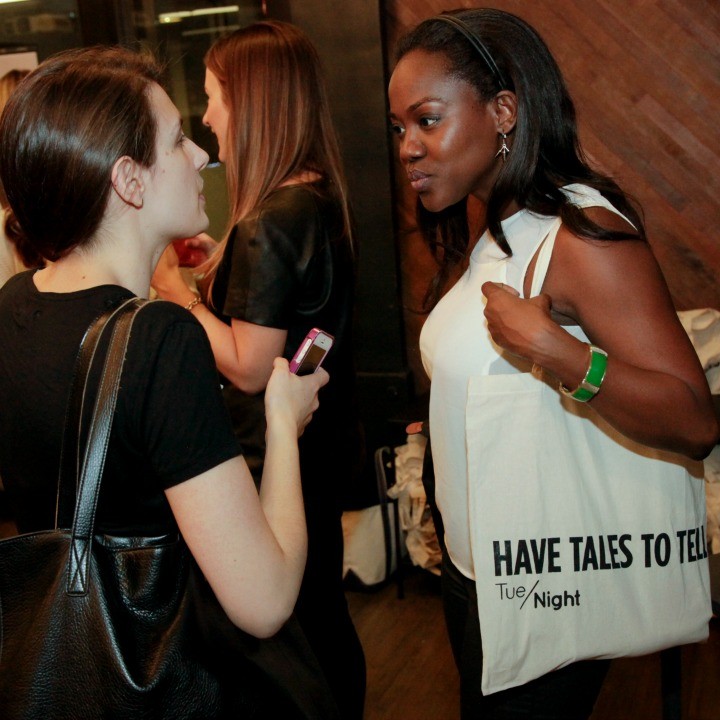 Can you believe the four founding members all met in person for the first time on our birthday night? Thank you from all of us: Kat Borosky, Adrianna Dufay, Margit Detweiler and Susan Linney. We’ll see you next year!

A bunch of folks from your friendly neighborhood TueNight Team wrote this.