The “Give Save, Spend” system is something many parents use — it’s a great technique for kids (and heck, anyone) to learn the value of money. We ran this piece over on the WhatsYourSystem.com site back in 2010. We thought we’d republish it and check back in with Valerie and her girls to see how things had changed four years later.

Who: Valerie (the mom), Maya and Rachel Gardner

The System: Valerie introduced the concept of “Give, Save, Spend” to her two daughters a few months ago. The idea is that each girl gets an allowance equal to her age (Maya is 8, Rachel is 3) and then they allocate the money in three envelopes – one to give to charity, one to put in “savings” and one to spend.

“They can do any allocation they want,” says Valerie, “but at least one dollar has to go into each category per week. So, yes, Rachel then only has one discretionary dollar but it’s just to get her used to it anyway. They can spend their ‘spend’ money at any time each week or save it up for a few weeks if they want something bigger.”

Where have they donated their “Save” money? “Maya and her friend Beatrice decided to give the give money to an animal charity in Berkeley. They combined the money from Maya’s envelope with money they made selling handmade dolls one day while we were there. Bea also emptied her piggy bank to add to the cause, so they ended up with $84 to donate! Rachel was not yet ready to part with her ‘give’ yet, despite my entreaties.”

Do the girls like it?   “Yes, when we were coming through the Tokyo airport on the way home to Singapore, I had given each girl 1000 yen to buy ‘stuff’, about 12 US dollars. Rachel found two things around 500Y each, so she was happy. Maya found something at 500Y, but wanted something else that was more than 500Y, so I said ‘sorry.’ Then she remembered she had her ‘spend allowance’ from the trip, so we pulled that out ($12), added it to the remaining 500 Y and she was able to buy an overpriced Zedbug! She definitely gets the allowance concept and is happy for me to throw foreign exchange money on top of it, even though she can’t follow all the details. I padded it with an extra $2 but I felt like she got the lesson.”

Valerie’s certainly not the first person to adopt this smart system; It’s a popular concept with parents to help kids learn the value of money. Here’s a variation on the theme on this blog. 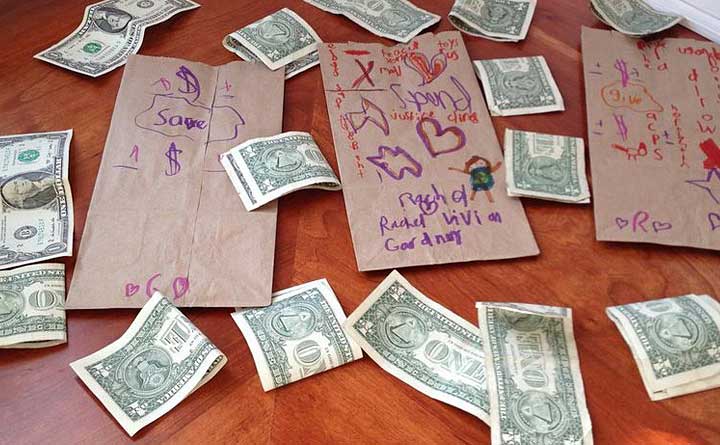 Valerie sent me this update via email:

So now it’s four years later and you’ve been back in the U.S. for a few years. Are you still using the Give, Save, Spend system with your daughters?

“Yes, we are. Maya is 11 and Rachel is 7, so now they each get ‘their age,’  per week, in US dollars. We didn’t do it for about a year, as we were getting re-settled. Then we started back up in January.”

Has the system evolved at all?

“Well, I haven’t changed it yet, but the girls got hip to the fact that they only needed to put $1 each in the Save and Give, and ALL the rest could go into Spend. So, I am going to change it, and make sure they put at least half of their money in the combined Give and Save. (As I type this, there are real moans coming from the kids. And this is after they virtuously, unprompted, answered the questions below!) I will be sure to remind them that all the other money they get for birthdays and Christmas go directly into the Spend envelope.”

What do Maya and Rachel think about it?

Rachel says, ‘It’s a good system, but I’m mad that I only get $7. I gave my Give money to the SPCA. It makes me feel good, because I’m making animals happy. The system is OK.'”

Does the system apply when you travel with your girls?

“When we went to Disney World earlier this year, I didn’t make them take any money from any of these envelopes. In other words, we decided to give them BONUS money to spend over the four-day trip. I was worried I was going to be henpecked as we passed each gift shop. So I told the girls they each had $60 to buy their souvenirs. They were very particular and judicious about the items they bought. This is reflective of their shopping habits any time they’re spending their own money. When it’s not their money, they are liked ‘crazed dogs’ as their father says!”