When I drank (especially toward the end of my “drinking career”, as they often say in AA) the quality of the spirits was of little meaning to me. Sure, I loved fancy Manhattans and extra dry Ketel One martinis, but at the end of the day, a bottle of Old Grandad or a pint of Absolute did the job just fine. And to be frank, I was a vodka girl at heart  — all I really needed was a chilled glass, some ice, and olives. Eventually, I didn’t even need the ice. Or the olives.

And eventually, I didn’t even need the glass.

So when I’d go out to small gatherings, and my craft-beer-loving buddies would offer me their favorite brews, or my wine connoisseur hosts would kindly offer a glass of their top-tier red, I graciously accepted. But I honestly didn’t give a rat’s ass about the robust, hoppy flavors or woody notes. I just wanted to get drunk.

So here’s the kicker. I think my sobriety has transformed me into one of those drink “snobs.”

These people, with their precious, fine-ingredient filled cocktails, annoyed me. “Stop fooling yourselves,” I used to think. “Taste is irrelevant. You know in the end all that matters is getting smashed.”

But I’m realizing now, in my 21st month of sobriety, that maybe they really DID care about the hoppy flavors and the woody notes. Because unlike me, they weren’t consuming their drinks with the desire to escape from some awful feeling inside themselves. Although I would have never believed it two years ago, they were, very simply, enjoying a tasty beverage.

So here’s the kicker. I think my sobriety has transformed me into one of those drink “snobs.” The only difference is that the beverages I’m now blabbing about are alcohol-free. But they’re just as similar in craftsmanship and liquid artistry as any pale ale or pinot noir I used to down and dismiss in an instant.

Now I scoff at Schweppes and Seagram’s. I chat up the joys of homemade SodaStream colas over Coke and Pepsi any chance I get. Kill me now, it’s true — I have become a virgin beverage connoisseur.

Here are my four current favorites (flask no longer required)!

Give these artisanal drinks a try and let me know what you think. 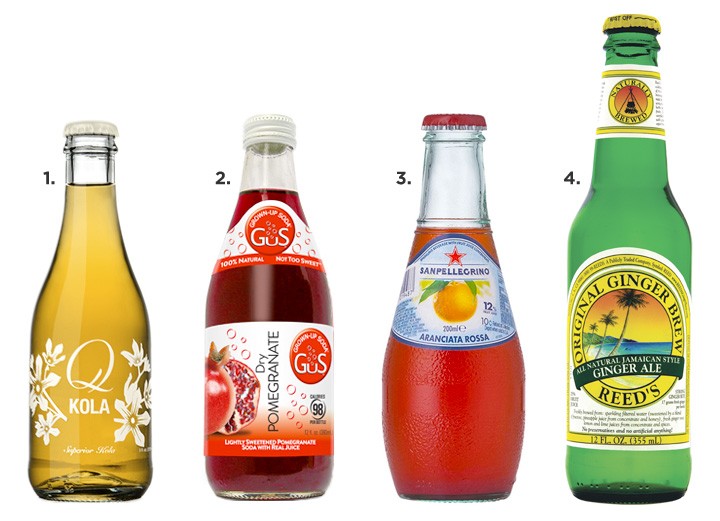 There are many yummy flavors in the Q line of sodas, but I like the Kola the best. It is less sugary than typical colas and has a touch of tang, which is due in large part to its organic ingredients: kola nut, cinnamon, cloves, coriander, lemon, lime, orange and nutmeg. Plus, it’s only 70 calories per each beautifully designed bottle.

Drinking a Grey Goose martini used to make me feel grown up. Now these sodas do. They’re 100% natural, caffeine-free and come in a variety of flavors, including my favorite, Dry Pomegranate. The flavors range slightly in calorie count, but none top 100.

These fruity Pellegrino concoctions are delicious, elegantly bottled, and so refreshing for summer. My current love is the Aranciata Rossa (Blood Orange). Calories vary, but most are in the 140-150 range per bottle or can.

This is ginger ale at its finest. They come in a variety of flavors, including Reed’s Extra Ginger Brew, which delivers a nice bite, thanks to its 26 extra grams of fresh ginger root. Each batch is hand crafted and uses fresh herbs, roots, spices and fruits. A bottle contains 145 calories.

Susan is a former book and magazine editor turned freelance writer, producer and wanderer. She lives in Brooklyn with her husband and MacBook Air. Say hi @Susan_Linney.