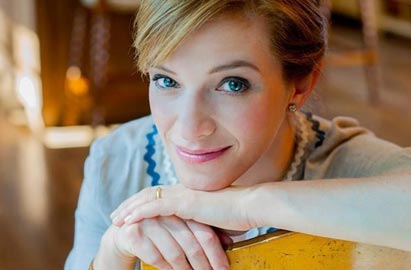 WHO SHE IS: You don’t expect a celebrity chef to invite you to her home and serve you “piggy cookies.” (She did. For me!) You don’t expect a celebrity chef to have a Master’s degree in Latin American Studies from Georgetown (she does). In fact, just eight years ago, Pati left her full-time job as a political analyst to pursue her love of Mexican food and the culture of her home country. On her hit show, Pati’s Mexican Table on PBS, you’ll often get a mini-history lesson on a region of Mexico, or the geneses of certain ingredients. She recently wrote an article for The Washington Post about the origins of Tex-Mex food, to which my tejana friend from Texas proclaimed should be taught in every school in America. Pati’s cookbook of the same name just rose to #1 on Amazon for Mexican cookbooks. (Take that, Rick Bayless!)

WHY SHE INSPIRES ME: Pati is one of those WYSIWYG women: What you see on TV is what you get in person. She is enthusiastic, entertaining, enchanting, and enterprising. This Latina mother of three boys had the cojones to switch careers mid-life, pursue her passion doggedly, all the while making people pine for her culinary creations. Pati insists on infusing an educational aspect into her show, her writings, and her recipes, which is something that I have always strived to do as a writer. Staying true to yourself can pay off. Pati represents that nexus where moxy meets sincerity — a trait that’s almost as beguiling as her accent, especially when she says, “peeeggy coookies.”

I’m Lonely! Should I Connect with My Ex?

Welcome to our new advice column where we try to answer all of your burning, confounding questions. Never fear,...