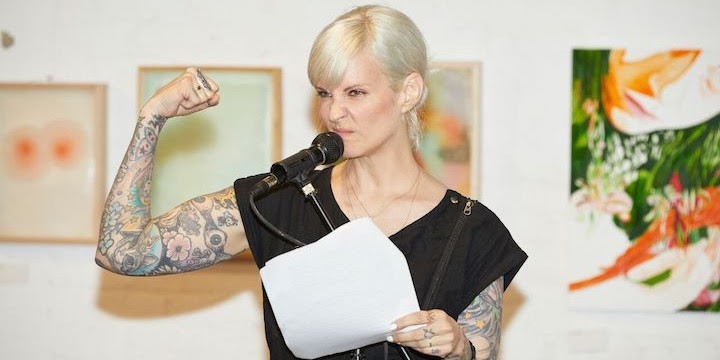 Theo Kogan is a makeup artist, musician, native Brooklynite, activist and mom. She is well known for being the singer of the Lunachicks, a band of best friends who happened to be girls. Theo and her pals started the band in high school just for fun; they ended up touring the world through the ’90s, becoming one of the Riot Grrrl bands of the era, and opening up for many of the legendary pop-punk bands of the day. She was a NY nightlife muse, and one of the first heavily tattooed fashion models/actors.

We were thrilled when Theo made her live reading debut at TueNight Live: 90s Bitchin July. She has two essays in the forthcoming book Women Who Rock, which is being released next month. You can pre-order a copy now, so do it! She is currently painting faces in New York Fashion Week. Literally. Right now.

1. On the nightstand: There’s a stack of books (seriously) but what I am reading is The Power by Naomi Alderman… for the past 6 months. Clearly I don’t get much time to read. Also tissues, my Hurraw! licorice lip balm, Jao Goe Oil — the scent is heavenly and it is amazing on body, hands, hair & nails — and my beloved foam ear plugs.

2. Can’t stop/won’t stop: My love of Cafe Bustelo. I often think about it before I go to sleep because I know it will be there in the morning. That first sip of its chocolatey deliciousness is like nothing else.

3. Jam of the minute: “Automatic Lover” by the Teddy Bears. It’s become my wake-up song for my alarm so it sticks in my head all day. It’s an oldie but a goodie.

4. Thing I miss: Diorific Plastic Shine lip gloss. It was amazing. Super pigmented and super shiny. There was this eggplant color that I used to wear on stage over a dark purple lipstick. That shit stayed ON.

6. Current crush: Not to be a dork, but… my hubs. He just played at Wigstock with his band the Toilet Boys a week ago. Every time I see him on stage my heart flutters like it’s the first time seeing him rock, and I feel so lucky to have him in my bed. Yes, I am a dork.

7. Will whine about: Politics, our POTUS and our country. Although, I am not sure it’s whining or deep mental and psychic trauma.

8. Will wine about: The fact that I can’t drink much wine anymore. I love it but it doesn’t love me back. Tequila however…

9. Best thing that happened yesterday: My daughter turned 8 and had a roller skating birthday party. It was fun as shit!

10. Looking forward to:  Persisticon 2.0 The Rockening. October 21 at The Bell House. Where comedy, art and electric feminists collide. I am one of the group of planners and this will also be a publication party for the aforementioned book, Women Who Rock. Be there!