Sometimes I forget to return a phone call or pay the cable bill or pick up my prescription…for three days in a row. There are nights when I find myself surprised at 10 PM that I’m still in my gym clothes from my morning workout. (How did that happen?) On certain mornings, there’s no milk in the fridge or TP in the bathroom or gas in the car. The dog smells.

Then there are days when life feels completely arranged and in order: no creases, no spills, no surprises. And depending on my frame of mind on those days, that sense of tidiness can be either comforting or stifling.

That’s because we all want to feel like we’ve got ourselves together, whatever that means. But we also want to feel spontaneous and not completely predictable, a combination that’s typically untidy. To me, tidy is a term that engenders both admiration and contempt, which is perhaps why I’m having trouble wearing it. When I try it on as a self-descriptor, the word fits me like a too-tight pair of pants. I want to look sleek but I can’t quite get the zipper zipped.

We all know that woman who seems to glide through life like a ballroom dancer. She’s always on time and never misplaces her phone or keys. She’s impeccably groomed with no stray grays, or brows in need of a tweeze, or weird post-40 zits. Her kids never have crusty noses or pudding on their shirts. It’s highly unlikely she ever farts. And we want to be just like her, right?

Not so fast. Sure, I’d like to be better organized in just about every realm. I’d like to do that cook-a-week’s-worth-of meals thing they talk about in the magazines I read at the salon, when I score an emergency appointment because I glance in the mirror and realize my roots have spread overnight as if fertilized with Scotts Miracle-Gro. I’d like to plant my garden more strategically so I end up with more than one salad’s worth of arugula and something less than 4,000 cucumbers. 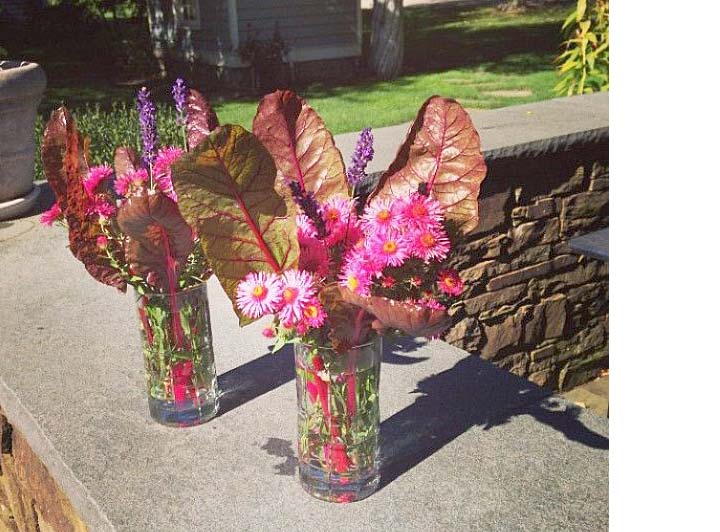 If you’re like me, you aspire to tidiness in theory but in practice, you’re actually a bit scattered and, on occasion, a full-on mess. That’s okay. The truth is I get it done and you probably do too. It may not always happen in a straight line or in a tidy fashion but most of the time, we get it done. Professionally, I work at my own strange pace but in 25 years, I’ve never missed a deadline. I’m a hazard in the kitchen but my kids somehow survived and are now pretty good cooks themselves. Despite the fact that my dog dug up my garden three times in two weeks last June, I had a bumper crop of Swiss chard (see evidence in photo) and dozens of big-as-my-head dahlias. I’m not the best-dressed or best-tressed, but I can whip myself into presentable shape when I need to, in less than 20 minutes.

So I say let’s embrace our messier selves, or at least banish aspirations of getting it all right all the time. If we stay mindful of the line between slightly scattered and totally flaky, we’ll be fine. And that tidy woman I mentioned? She’s probably a huge bore.

Amy Barr is a veteran magazine editor. She started her career as an editorial assistant at Working Mother magazine and rose through the ranks to become Executive Editor before joining Time Inc. to launch the online edition of Parenting, where she served as managing editor. Amy was also part of the online launch teams for Worth.com, What to Expect When You're Expecting, The South Beach Diet and Everyday Health. You can find Amy on Twitter at @amylbarr.