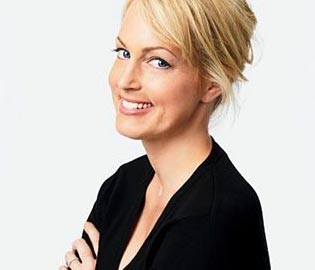 WHO SHE IS: Alexandra “Ali” Wentworth is a study in comic incongruities: the WASP-y blonde daughter of Mabel “Muffie” Cabot, Nancy Regan’s press secretary… and a salty-mouthed comedian known for her Cher and Amy Buttafuco impersonations on In Living Color. The wife of ABC’s respected anchor George Stephanopoulos… and someone who likes to surprise him by jumping on tables on Good Morning America. A mother of two and an actress who’s appeared in films like Jerry Maguire, Office Space and It’s Complicated and a woman who publicly takes us on her plastic-surgery quest for a less puffy pair of eyes.

Some first fell for Ali as “schmoopy” on Seinfeld. My introduction to Ali, however, was through her two-season stint as the creator and star of Head Case, a gone-too-soon Starz original. Ali played the worst, most self-centered shrink-to-the-stars you’d ever meet — quirky, cringeworthy and hilarious. You can catch up on YouTube — highly recommend it. I devoured her fun memoir,  Ali in Wonderland: And Other Tall Tales (2012 Harper Collins) , a romp of privileged upbringing, Hollywood hijinks and Alan Greenspan.

WHY SHE INSPIRES ME: Somehow Ali’s always stayed on the fringe; never quite capturing that bigger audience. Which is a shame. She’s subversive, smart and  sharp-witted — my kind of heady mix. Oddly enough, Ali’s plastic surgery videos were part of the inspiration for TueNight. A year ago or so, I spent one afternoon watching her controversial series, “Ali Unpacks Her Bags,” about whether she should go under the knife. Her videos were so unflinchingly honest, funny and confused; she’d captured that feeling we all have as we age, aka WHAT’S HAPPENING TO MY BODY? And, if I can fix it , should I? Whether you agree or disagree with her choice (if you watch the series, it gets fairly gruesome, she doesn’t hold back), her candor is refreshingly real, hopefully, like us.