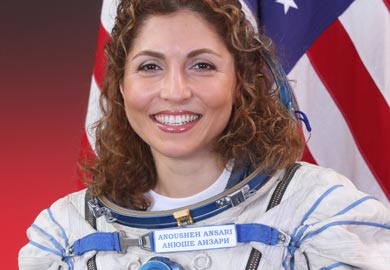 WHO SHE IS: What a 40th birthday present! Just a few days after Anousheh Ansari rolled into that monumental age, she rocketed into the stratosphere and became the first private female space explorer and the first Iranian in space. And while that eight days in space may have earned her worldwide acclaim, it’s her work on terra firma that proves her a woman to watch.

Born in Iran, Anousheh emigrated to the US with her family as a teen, speaking no English. Now she speaks Persian as well as English — and French — and has a functional knowledge of Russian (for space travel, of course!). Having worked in the entrepreneurial engineering space for almost two decades, she is a holder of three patents. Anousheh is the former CEO/Co-Founder of Telecom Technologies, a pioneer in the VoIP space.

But what I love most? She founded the What If? Prize Competition in an effort to encourage young astrophiles to shoot for the stars.

WHY SHE INSPIRES ME: As a little girl in Mashhad, Iran, Anousheh dreamed of going into space. As a little girl in Springfield, VA, I did, too. I had a lot more working in my favor, on paper, than Anousheh. Except that old stickler: the drive. The work ethic.

What do we have in common? Not much. A great education? Yes. Anousheh and I both attended George Mason University in Fairfax, VA. (Go Patriots!)

What do I want us to have in common? The drive. The work ethic.

At this point, I may have to admit I’ll never be an astronaut. (I think math is required, and still I am not quite sure about fractions. Either math or money – and I have neither.) But what I might still be able to aspire to is inspiring younger generations (AKA, my fabulous nieces and nephews!) through travel and exploration of the world and mind. I can share where I’ve been and tell them how I think they — and we — can affect change. Whether that’s working to help new Americans to learn English (like my dad did), or being aware of the many challenges that face immigrants, I think I can help these amazing kids enhance our great melting pot. And that’s pretty stellar.