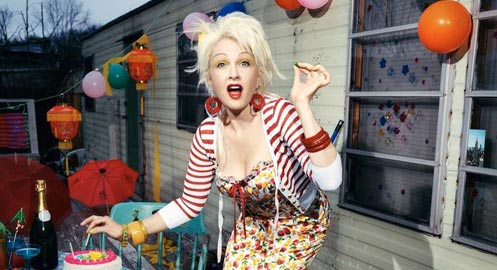 WHO SHE IS: Cyndi Lauper burst onto the scene in the early 1980s, sporting a shock of long, bright-red hair and a mismatched mess of tulle skirts, plaid pants, lacey tanks and tons of attitude. She was bold, brash, and unafraid to speak in her heavy Queens accent. She also (somewhat inexplicably) loved to align herself with wrestling stars. Her debut album, She’s So Unusual, was a huge hit, spawning the classic 80s anthem “Girls Just Wanna Have Fun” (which, as we all know, is a tune that has stood the test of time) as well as “Time After Time,” “She Bop,” and more. She released “The Goonies ‘R’ Good Enough” for the film in 1985, (a total aside, but a song I listened to and repeatedly rewound on my Walkman for probably a month straight), and her second album, True Colors, while not as commercially successful as her first, still managed to sell two million copies in the United States alone.

Cyndi’s sound evolved the world entered the 90’s, and she increased her involvement in her own music production and songwriting. She also got the bit by the acting bug, and appeared in more than a dozen movies (most of which have not been commercially successful — and a bit odd — but that never stopped her), as well as some (more successful) TV cameos. A tireless advocate for LGBT rights, Lauper is a member of the Matthew Shepard Foundation Board, and continually devotes concert tours to promoting the Foundation’s message of understanding and acceptance. Most recently, Cyndi composed the music and lyrics for the Grammy-Award winning Broadway musical Kinky Boots (based on the 2006 film of the same name) that, if forced to sum up in a sentence, is about a young man who produces custom transvestite footwear for drag artists.

WHY SHE INSPIRES ME: Any 80’s sensation that remains relevant 30-plus years after an initial wave of commercial success is someone special and smart. But Cyndi is particularly admirable — and interesting — because of the kinds of projects she’s involved herself with since her days of bubblegum pop. In addition to the aforementioned endeavors, in 2012 Lauper started the Forty to None Project, which works to raise LGTBT awareness and help to bring an end to gay, lesbian, bisexual, and transgender youth homelessness. She’s a true beacon of light for anyone, anywhere, who may feel “unusual.”

And I’ll never get sick of Cyndi’s sound. In 1985 I was dancing around my grandmother’s living room to “She Bop” (completely clueless that it was about masturbation); today, I can’t get enough of the Kinky Boots soundtrack. And just yesterday, I was listening to a live version of one of my favorite songs ever: True Colors. It resonates with me especially now that I’m sober, as it speaks to how hard it is, in this mad, sad world, to recognize and celebrate our inner beauty. The song was publicly embraced as an anthem for gay rights; but for me, it’s a song that sums up the bedrock of recovery.