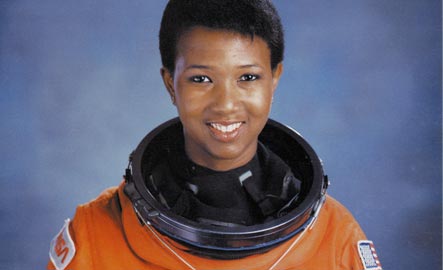 OCCUPATION: Physician, former NASA Astronaut, and the Principal for the 100 Year Starship Foundation

WHO SHE IS: Well, for starters, Mae Jemison was the first African-American woman to travel into space. So she’s a literally and figuratively a barrier breaker. Born in Decatur, Alabama, the seriously studious Jemison moved to Chicago as a young child, was an honor student in high school and was accepted to Stanford University at the tender age of 16. She gradated with a B.S. in chemical engineering and a B.A. in African and Afro-American Studies. Although first her application to NASA was turned down, she was accepted in 1987 after submitting her second. Before her history-making shuttle launch in 1992, Jemison worked at the Kennedy Space station in Florida, doing tasks such as verifying software and help launch vehicle.­ Jemison resigned from NASA in 1993, and went on to pursue numerous ventures. She was a professor of Environmental Studies at Dartmouth College from 1995 to 200o, and is currently a Professor-at-Large at Cornell University.

WHY SHE INSPIRES ME: She left earth! That’s inspiring enough for me. Add to that her fearlessness when going into space, her determination to make sure that science, technology, engineering and mathematics programs are available and accessible to women, and her desire to share her incredible knowledge with others. Mae speaks regularly at events, promoting the importance of science and technology, especially for young students. She’s a true role model for any woman, anywhere, who has a dream. Work hard for it, and it will most likely come true.