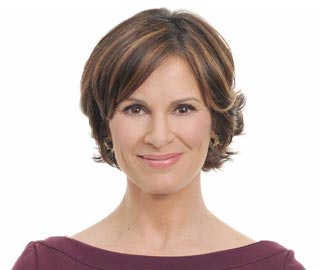 I don’t believe Vargas would mind me mentioning the latter — in January of 2014, she went public with her illness, after spending years struggling with and hiding her disease from her employers, friends and family. Her admission set off a blast of both media scrutiny and public admiration, however she’s remained steadfast in her resolve, even prompting the often impenetrable Barbara Walters to apologize for a comment she made regarding Vargas’ behavior while she was still drinking.

WHY SHE INSPIRES ME: As a women in recovery myself (and one who writes openly about my illness), Vargas is a not only a role model, but a constant reminder of the importance of truth. Admitting you’re an alcoholic is hard enough; letting the world know is a whole different story. When she “came out” on Good Morning America, I literally wept. A sliver of those tears came from pure anger at this illness, which is so debilitating and deadly. But the bulk of them were tears of admiration, awe and hope. Vargas’ brutally frank, public honesty encourages me to continue to write openly about my own experiences. And whenever I start to feel doubtful or exposed, I think of her, and how many people she’s no doubt helped.

Vargas also opened up about her issues with the anxiety that fueled her drinking, which is something I can relate to 100%. I’ve suffered from panic attacks since the age of 28, and at times literally believed I would die if I didn’t get a drink in me. But after four consecutive months in rehab, tons of therapy and more than two years of sobriety, I’ve learned that I don’t need booze to get through those feelings. “You learn how to deal with [them],” Vargas said on The View. “Your feelings aren’t going to kill you.”

But drinking will. And knowing that there are women out there who are brave enough not only to battle their addiction but also talk about it helps remove the stigma attached to this deadly disease. It makes me certain that sobriety will not only keep me alive, but allow me to be the best ME I can be.

VIDEO: Perimenopause Is Really Hot Right Now! We Have 5...

What Do You Call the Care that Comes Before Full-Blown...

9 Home Upgrades Every Gen Xer Needs to Have (Plus One Crazy...

The New Secret Weapon for a Comfortable Retirement Is…...

#RealTalk: What’s Your Vision for Retirement?

I May Have Starred in a Fetish Video

Real World Homecoming Episode 6: Will You Recognize Me? Call My Name or Walk On By?

We're not the only ones who cried, right?

I was today years old when I realized I needed slippers. And these Subu ones are perfect...

VIDEO: Perimenopause Is Really Hot Right Now! We Have 5 Questions

In which Kevin tries to get through to Becky, Norman revisits the aftermath of the first season, and everyone...

How the Nail Salon Became My Way Through Grief

I rub the acetone-soaked cotton ball over my nail over and over again. I take each nail and make...

Liz is TueNight’s social media manager. She's working on a memoir about her experiences as a first-generation American daughter...

In which the crew visits "E-Nice," we learn about Norman's recent troubles, and Heather goes above and beyond to...