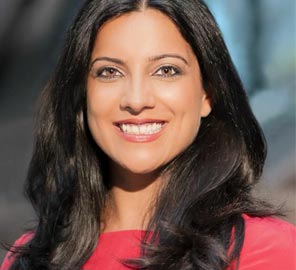 WHO SHE IS: Saujani is the daughter of Indian immigrants who were expelled from Uganda by Idi Amin. A lawyer by education and training, she worked for various Wall Street firms and hedge funds before launching a political career. She became the first Indian-American woman to run for Congress in 2010 (losing the primary to incumbent Carolyn Mahoney).

It was during this race that Saujani was first inspired to found the nonprofit Girls Who Code, which launched in 2012. GWC teaches young women the technical skills they need to survive in our new tech-centric society; skills that include web design, algorithms, and robotics. She was inspired to do this, she told TechRepublic, because she found fewer girls in technology education at every level, no matter their socioeconomic status.

Saujani became New York City’s deputy public advocate and ran last year to become the city’s public advocate, losing the race to Letitia James. She has continued to advocate for women in tech and has written the book, Women Who Don’t Wait In Line.

WHY SHE INSPIRES ME: Saujani hasn’t allowed failure to define her. She has talked about applying to Yale Law School three times before being accepted. She saw a problem in technical education among the young and chose to do something about it, instead of just talking about it. Even in her first job, where she defended those accused of securities fraud, she took on pro bono asylum cases. This woman is a doer, not a talker.