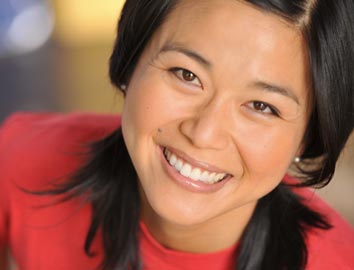 WHO SHE IS:  What is it like growing up Asian American? If you want the honest truth, you can turn to Lela Lee’s “Kim.” Imagine an unabashed little girl version of “Cathy” who curses like a sailor. Lee’s flagship cartoon, “Angry Little Asian Girl,” has evolved into a creative comic strip enterprise. In the comic, Lee features a cast of diverse characters growing up American but dealing with issues of ethnicity, assimilation and acceptance. From comic books, animated shorts to selling merchandise, Lee has grown her Angry Little Girls collection into an incredible business off an unconventional and zany cartoon. Her comic series is syndicated by GoComics and in 2012, was nominated for the comic industry’s “Harvey Award.” Lee is also a television writer and actress. She’s appeared in recurring roles on TV shows such as Scrubs and cast in independent films (Justin Lin’s Better Luck Tomorrow).  She also has worked on several popular TV programs — Felicity, Friends and Curb Your Enthusiasm, to name a few. Hailing from UC Berkeley, Lee has always been an advocate and voice for the Asian Pacific Islander (API) community. She’s been interviewed on several Asian American diaspora documentaries (PBS’ “Searching for Asian America“) and gives back to the broader community.

WHY SHE INSPIRES ME: Hard to believe that ALAG is celebrating its 20th anniversary this year. Back in the day, Lela Lee gave me the confidence I needed to deal with “otherness.” I could identify with her heroine at school, home or just dealing with strangers. Overall, she let me know that it’s okay to say “Fuck You” to ignorance without feeling guilty or worrying about judgment. Yes, I bought into the goodies and still can fit into my ALAG tee shirt and own one of the  first few VHS tapes of “The First Day of School.”

If you meet her, Lee is genuinely sweet, approachable and funny, despite her hard-ass ALAG character. When she was in Berkeley and touring the API film circuit, I was a doe-eyed, East Coast college kid advocating Asian American studies and supporting every diverse movement I could on the east coast. ALAG gave me the drive to continue connecting with the API creative arts community when I moved to the Washington DC metro area. Her comics still make me laugh as Lee continues to express her witty sense of humor even now as a mom and wife.