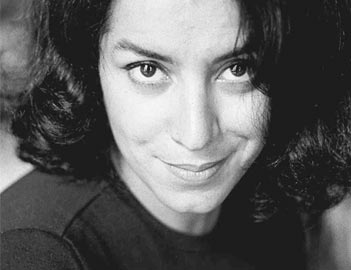 WHO SHE IS: The prolific writer/artist/cartoonist, who is perhaps best known for her the graphic novels Persepolis and Persepolis 2. In 2007, Persepolis was adapted for the big-screen (and won the 2007 Academy Award for best foreign language film). And though Marjane’s second movie Chicken with Plums — a story based on her book about a famous violinist who loses his instrument and with it the will to live — elicited a lukewarm reception at best, she was undaunted, and forged on to make The Voices, a thriller starring Ryan Reynolds that was screened at Sundance in 2014.

WHY SHE INSPIRES ME: I cracked up at so many of the brilliant illustrations in Persepolis 2, which I read before its prequel, Persepolis. Her drawings hit home on so many levels for me: from the concrete (being the only girl with thick, dark body hair in the  land of the fair-haired — that was me, an Indian growing up in Switzerland), to the more esoteric, intangible and deep-rooted nostalgia that continually haunts anyone (myself included) who’s had to live away from his or her place of birth.

No one but Marjane has been able to tell the story of the diaspora in such an unconventional manner. She also parodied the harshness of the Iranian regime to the point of total ridicule and, through the years, her comic books have offered acerbic commentaries on various social moirés, both in Iran and in the West.

She does as she pleases and you gotta love her for that. She’s into wearing black, is a chain smoker (so, reportedly, was her grandmother, who lived until the age of 92) and her lips bear  a thick slash of bright red. And if you’re not okay with all that — well, then, “Merde” to you.